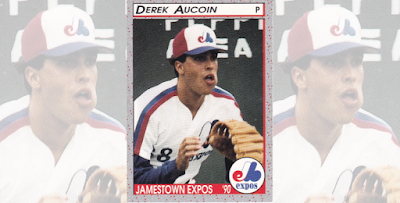 Derek Aucoin drew praise from Expos manager Felipe Alou for his early start in spring 1996, according to The Palm Beach Post.

"He's some kind of nasty," Alou told The Post. "I can't wait for the games because of that one guy to see what the reaction is from major-league hitters."

Aucoin eventually made his major league debut with Montreal that May. And it came with some fanfare. He was a Montreal native. His promotion to the top club made him the first - and eventually only - homegrown Expo.

His stay in the majors, however, was brief. He played two games and never got back.

Aucoin's career began in 1989, signed by the Expos as an undrafted free agent out of Douglas College in British Columbia. He played his high school ball at Terrebonne, Que., just outside Montreal.

Growing up outside Montreal, Aucoin was a life-long Expos fan. And he got his focus in baseball young, he told The Upper West Side Spirit years later.

"When I was 10, I got to meet Andre Dawson," Aucoin told The Spirit. "That was what changed my life."

Aucoin started with the Expos in the rookie Gulf Coast League. He went 2-1 over seven outings, with a 2.66 ERA.

Aucoin debuted May 21 and went two-thirds of an inning at San Francisco. He gave up one earned on two hits. He then returned four days later, at home against the Dodgers. He went two innings, gave up one hit and no runs.

Aucoin played out 1996 at AAA Ottawa, then 1997 between Ottawa and West Palm Beach. He then saw one final season, 28 games across four levels, with the Mets in 1998 to end his career.

Aucoin went on to become an entrepreneur, featured by The New York Times in 2000. He also became an analyst for the French-language network TVA.

In August 2019, he announced he was battling with a brain tumor. Aucoin also issued a statement then, according to The Toronto Star: "I will fight to the end to win this game and I will devote all my energies." 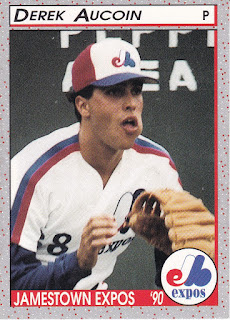