Originally published June 16, 2018
Bill Stein had a couple big nights for the Texas Rangers in June 1983, he knew his role, he told UPI that month.

"When I have a chance to play I want to produce and my chances of doing that are enhanced when the guys are on base for me," Stein told UPI. "But I'm not an everyday player. When Wayne Tolleson gets healthy, he'll be back at second and I'll be on the bench because I'm a utility player."

While Stein knew his role through a major league career that spanned 14 seasons, he took a different role later, as a minor league manager.

Stein's career in baseball began in 1969, taken by the Cardinals in the fourth round of the draft out of Southern Illinois University.

He started with the Cardinals at AAA Tulsa. He then played at AA Arkansas, returned to Tulsa and made St. Louis in 1972.

Stein continued playing in the majors each year through 1985. He moved to the Rangers for 1981 and set the American League record for most consecutive pinch hits with seven while playing for manager Don Zimmer.

"He was fun to be around," Stein told The Tulsa World years later. "Zim never had to tell me to pinch hit. Whenever we had the tying run in scoring position late, it was automatic. I had a bat and was ready to go. It didn't matter whether a lefty or right-hander was pitching."

Stein played his final five seasons with the Rangers. He started his managerial career by 1988, when he took over at short-season Little Falls. He moved to Columbia in 1989 and stayed for 1990. He managed at short-season Bend for 1991 and single-A Clinton for 1992 and then coached at AA Shreveport for 1993. 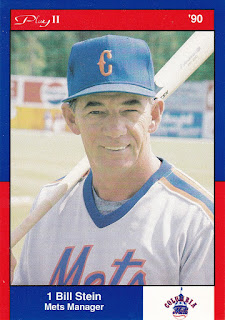