Originally published Feb. 10, 2013
Coming off a year in which he won a AAA playoffs MVP honor, Scooter Tucker tried to explain to The Tucson Citizen his success.

"In this game confidence is important," Tucker told The Citizen. "It doesn't have to be an arrogant confidence, but a feeling of knowing you can do the job. The big thing is, when you get there you have to ride it as long as you can because you'll have ups and downs in this game."

Tucker that year was also coming off his second season with time in the majors. He would get time in just one more.

Tucker's professional career began in 1988, taken by the Giants in the fifth round of the draft, out of Delta State University in Mississippi.

For 1992. Tucker arrived in the Astros system, taken off waivers. He played that year at AAA Tucson. He also made major league Houston.

Going into 1993, Tucker was back with the big club for the spring. In mid-March, Tucker found himself catching an unexpected pitcher, former President George H.W. Bush. Tucker told The Orlando Sentinel it was so unexpected that, when Bush went up to him, Tucker had a turkey sandwich in his mouth.

Tucker then got into nine more games with the Astros during the season, getting five hits in 26 at bats.

He didn't make it up at all in 1994. That September, with the strike in full swing, Tucker wondered to The Citizen whether he'd lost an opportunity.

"There's no way of knowing whether this would've been a breakthrough year," Tucker told The Citizen. "But in the back of your mind you're always thinking: 'I'm ready.' And there’s only one way to find out."

Tucker did get back to the majors in 1995, but he didn't break through. He got five games with the Astros and another 17 with the Indians, ending his major league career. He played in just one more minor league season, ending his playing career for good.

His playing career over, Tucker left the game and went into business. By 2007, though, he was back in the game, coaching with the independent Pensacola Pelicans. For 2013, he served as manager of the Lake County Captains.

"Although I enjoyed my life in business," Tucker told The Willoughby News-Herald in November 2012, "once I got away from baseball, I missed it terribly." 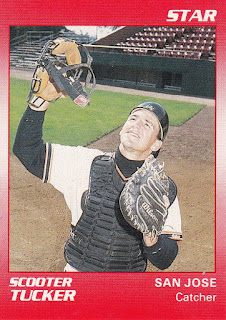