Royce Clayton got his call to the bigs, then celebrated with his dogs; Played 17 years in bigs

Originally published Sept. 26, 2010
Royce Clayton had been named the top prospect in the minor leagues by The Sporting News earlier in 1991, but Clayton still didn't expect his call-up to come so soon, The Los Angeles Times wrote that September.

"I know I don't have to hit the ball out of the park to drive in runs," Clayton told reporters after the game. "The RBIs were out there and I'm aggressive."

Clayton left St. Louis, traded to Texas, becoming the Rangers' everyday shortstop. That was until it was Clayton who made way for a possible future Hall of Famer, Alex Rodriguez. Clayton was traded to the White Sox for 2001, a prospect Clayton looked forward to.

"Once I found out I was traded to the White Sox, I was basically overwhelmed," Clayton told the Associated Press in December 2000. "I was very positive about going to a place where I could win. That was my first and foremost concern."

Going into what would be his final season, 2007, Clayton felt confident. He signed a one-year deal with Toronto and referenced his durability.

But Clayton wouldn't last the year. The Blue Jays released him in August. He soon signed on with Boston, coming on in September to play his last eight games in the majors.

Clayton has since gone on to other pursuits, including a small part in the new Moneyball movie. He also has teaches the game and oversees charitable efforts, according to his Web site RoyceClayton.com.

His brief time with the Red Sox appears to have been the high point of his career, featured prominently on his site. He didn't get to play for the Red Sox in the post-season, but he did get to celebrate along side his new teammates as the Red Sox won the World Series, according to The Providence Journal.

Clayton even got doused with champagne by Kevin Youkilis as the Red Sox won the American League Championship Series with Youkilis acknowledging that Clayton made it, The Journal wrote.

''There’s no better feeling in the world,'' Clayton told The Journal. ''I've played a long time to get to this point. I've worked extremely hard and this is what you play for." 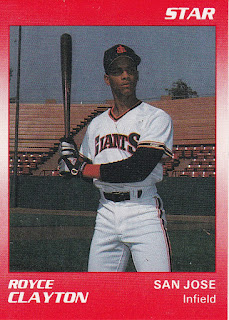