Randy Kramer felt comfortable with the Pirates in May 1990; Saw the bigs over four seasons

Randy Kramer seemed to fit in in the majors in May 1990. A pitch that "got away" and also happened to appear to appear and defend a teammate will do that, according to The Pittsburgh Post-Gazette.

So, before his next start, Kramer felt like he belonged, he told The Post-Gazette.

"This is the first time I've been comfortable here," Kramer told The Post-Gazette. "I know what my role is. I know what they expect of me."

Kramer pitched that year in his third season in the majors. In a career that would ultimately span 13 seasons, he would see major league time in one more.

Kramer's career began in 1982, taken by the Rangers in the first round of the June secondary draft out of San Jose City College.

Kramer started with the Rangers in the rookie Gulf Coast League. He moved to single-A Burlington in 1983. In 1986, he made AA for the first time, at Tulsa. In 26 outings at Tulsa that year, he saved three and had an ERA of 4.38.

He moved to the Pirates system for 1987, sent there in a trade. He played most of that season at AA Harrisburg, but he also saw 11 outings at AAA Vancouver. In 11 outings, one start at Vancouver, Kramer gave up 12 earned in 17.1 innings of work.

Kramer then played 1988 completely at AAA Buffalo. That September, he made Pittsburgh. Kramer's first major league win came in relief that Sept. 25, his fourth major league appearance after his September call-up.

"That made me a happy camper," Kramer told The Post-Gazette about his initial call-up. "My objective was to come here and show Skip and the staff - and really myself, too - what I could do."

Kramer then played 1991 at AAA between the Mariners and Braves systems. He saw the majors one more time in 1992, with Seattle. He went 0-1 in four starts, giving up 14 earned in 16.1 innings of work.

Kramer then concluded his career with two more seasons in the minors, his last involving seven outings at AAA Ottawa with the Expos. 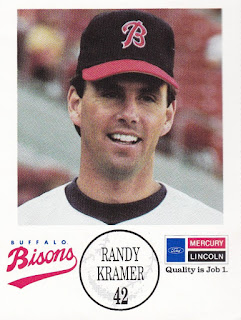