Marvin Cole learned to relax more, but couldn't take it to the bigs; Played 12 pro seasons 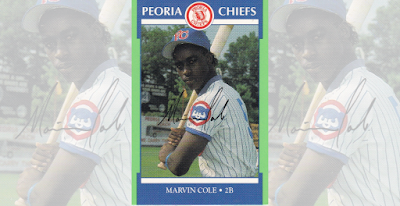 Between injuries and playing time in 1989, Marvin Cole admitted to his hometown Alexandria Town Talk later that he pressed himself too hard.

But he hoped his 1990 season to be different, Cole told The Town Talk.

"I never could relax," Cole told The Town Talk of his 1989 campaign. "I've learned to relax more. That's my game. If you press, you become too mechanical."

Cole played the previous season at single-A Charleston, got into 76 games and hit .234. He played 1990 at single-A Peoria, but could do little better. He played one more season in affiliated ball, then went on to a career on the independent circuit, including seven seasons with his hometown Alexandria Aces.

Cole's career began in 1988, taken by the Cubs in the 42nd round of the draft out of Alexandria High School in Louisiana.

Cole started with the Cubs at rookie Wytheville. In 51 games there, he hit .315. He then moved to Charleston and then to Peoria.

Back spasms delayed his arrival at Peoria. He hit .250 over 60 games. He knocked a late two-run single in a July game to put his team on top.

Cole played 1991 at Winston-Salem. He hit an RBI double in a May win and hit .272 over his 86 games there. But that season turned out to be his last with the Cubs and in affiliated ball.

Cole then settled in Denver, but then heard about the new independent Alexandria Aces in the Texas-Louisiana league, he told The Town Talk. He returned home, got himself in shape and got signed.

"I liked the way he handled himself in the field. He has smooth, soft hands. He hit good to all fields," Falcone told The Town Talk. 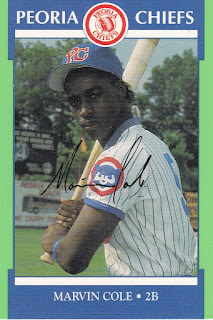