Lester Strode spent more than three decades with the Cubs organization, as a player, coordinator and coach 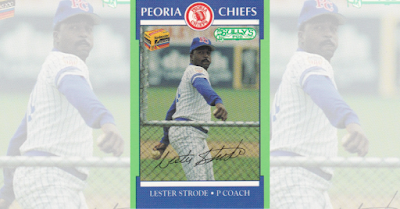 Lester Strode celebrated three decades as a coach with the Cubs in 2018, enough time to see the game change and change with it, he told CBS Chicago that August.

He'd spent the most recent 12 seasons as the team's bullpen coach in Chicago - and he was there to help the team to the 2016 World Series title.

"That why I was here for 30 years; to win the World Series!" Strode said to CBS Chicago. "It's been a blessing to be in this organization, seeing it's progress over the years and to win a championship it made it all worth the while."

Strode started with the Cubs back in 1988, at the tail end of his nine-season-long playing career. He saw AAA as a player, but not the bigs.

He then started coaching with the organization by 1989 and he continued on, first as a minors coach and coordinator and then, starting in 2007, as the Cubs' major league bullpen coach.

Strode's career in baseball began in 1980, taken by the Royals in the fourth round of the draft out of Kentucky State University.

Strode started with the Royals in the rookie Gulf Coast League. He made single-A Charleston briefly in 1981 and then single-A Fort Myers in 1982. He went 8-11 that year, with a 3.55 ERA.

He made AA Jacksonville for 1983 and AAA Omaha for 1984. He then played the next five seasons at AAA, without a call up to the majors.

Strode saw four outings with AAA Rochester in the Orioles system in 1987 had a rough time of it. "My game is to get them to hit it the opposite way," Strode told The Rochester Democrat and Chronicle after tough a June start.

He then played 1988 between AAA Louisville with the Cardinals and AAA Iowa with the Cubs.

In 1994, he's credited as reaching the majors, an assistant coach with the Cubs in Chicago and the team's minor league pitching coordinator in 1996.

As a coordinator, Strode watched over the development of the Cubs pitchers in the minors. In 1997, he worked with a young Kerry Wood at AA Orlando, keeping Wood in the game after some early control problems, according to MLB.com.

Strode arrived back in Chicago as bullpen coach in 2007. He continued in that role - and with the Cubs - until November 2019, when he wasn't brought back for 2020.

In November 2016, Strode spoke to The Louisville Courier-Journal about what it was like to be with the Cubs as the team won the World Series.

"Once that last out was recorded, as a group all the bullpen guys jumped and hugged and congratulated each other," Strode told The Courier-Journal. "From there, honestly, at the moment you know you’ve won, but you’re in a bubble. It’s wild and crazy but, at the same time, very jubilant." 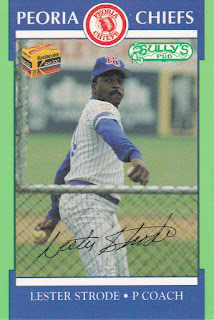