Joseph Bosco wrote books about the 1988 Peoria Chiefs and 1995 O.J. Simpson trial - and nearly testified at the trial

Author Joseph Bosco spent the 1988 season with the Peoria Chiefs and his experience turned into a book, "The Boys Who Would Be Cubs."

The team, though, at least part-owner Pete Vonachen, wasn't thrilled with Bosco's portrayal, according to The Associated Press, believing it portrayed the team as "a bunch of guys who play ball all day and chase girls all night."

"He said this is a book we'd be proud of. We planned to promote it at our ballpark," Vonachen told The AP. "I'm disappointed in how it turned out. We certainly can't promote this. And I certainly wouldn't send an autographed copy of this book to my pastor."

No matter how the team felt about Bosco's book, or whether the team could promote it, the team did promote it enough to give Bosco a card in that year's team set.

Bosco spent the 1988 season with Peoria as part of a long career as an author. A few years later, he would turn true crime writer and attend the entirety of the 1995 O.J. Simpson murder trial for another book, "A Problem of Evidence."

Bosco's path to Peoria began as a teenager. He started writing at age 18 and had supported himself fully as a writer since 1982, he recalled later.

His Peoria with designs on a novel, his first book, but a discussion with a scout led him to Peoria and the 1988 Peoria Chiefs, according to The Christian Science Monitor. The magazine gave the book a positive review. (The Chicago Tribune did not)

"Bosco is a positively radiant writer," The Christian Science Monitor wrote. "He has a keen eye for the backdrop and a keen ear for the argot of the minor leagues. And there is a freshness, an energy to his prose."

Bosco went on to write two more books. One, "Blood Will Tell: A True Story of Deadly Obsession," concerned a New Orleans murder case. The other, the one on the O.J. Simpson trial.

It was actually his work on "Blood Will Tell" that led to his work on the Simpson case, he told attorneys at the Simpson trial. Bosco worked closely with forensic scientist Dr. Henry Lee, who went on to play an important role in the Simpson investigation.

Bosco passed away in 2010 at the age of 61. His obituary in The Los Angeles Times described how he covered the Simpson trial for Penthouse magazine and then used what he learned for his book.

At the trial, The Times wrote, Bosco was one of only a few people to have a permanent seat inside the proceedings.

Simpson's defense even wanted to call Bosco as a witness related to one of Bosco's trial stories about police leaks. Bosco testified outside of the presence of the jury and cited California's shield law for journalists, which Judge Lance Ito accepted, according to the trial transcript.

The judge also ultimately found no relevant testimony from Bosco and denied the defense motion for him to testify in front of the jury, according to the transcript.

Bosco went on to move to China in 2002 and became a teacher, The Times wrote. He passed away in Beijing in July 2010. 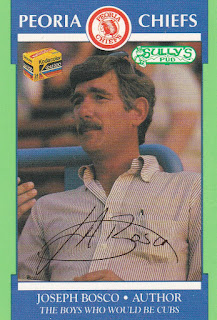