Jim Sweeney's  0-2 offering in this June 1990 game came inside, really inside and the opposing Madison Muskies didn't like it, according to The Wisconsin State Journal.

Sweeney's pitch hit the batter Enoch Simmons. Simmons then started for Sweeney, words were exchanged and the benches cleared, The Journal wrote.

The seventh-inning episode led to shoving and six ejections in a game Peoria went on to lose in extras, The Journal wrote.

Sweeney threw that pitch in his second pro season - a season in which he added the nickname "Wild Thing" to the facsimile autograph on his card. That season, however, also turned out to be his last. He played at short-season Geneva and at single-A Peoria, but didn't make it higher.

Sweeney's career began in 1989, signed by the Cubs as an undrafted free agent out of Eastern Illinois University.

At Eastern Illinois, Sweeney topped his team in multiple categories in 1989. He had a 2.87 ERA, five saves and appeared in 21 games.

He did enough at Eastern Illinois to get noticed by Cubs scout Tom Davis, who was credited with signing Sweeney.

With the Cubs, Sweeney debuted at short-season Geneva. He went 7-5 over 23 mostly relief outings. He also turned in a 2.16 ERA and saved four games.

Sweeney then moved to Peoria for 1990 and arrived in time to make the team's update card set. Sweeney saw 35 outings, went 0-3 and had a 3.52 ERA to end his career. 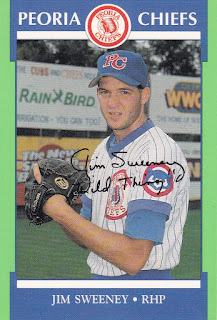