Jerrone Williams hit well in independent ball, but couldn't get back to affiliated ball, or make bigs

Jerrone Williams had a big game for his hometown Tupelo Tornado team in June 1997, as he picked up two home runs and a triple, according to The Northwest Mississippi Daily Journal.

His Tupelo team, however, took the loss, 12-9, The Daily Journal wrote. Williams looked at both the loss and his performance afterward.

"I don't want to be selfish, but I did have a good ball game," Williams told The Daily Journal. "I'm tickled to death with the way the team played. We battled and battled, we just came up short."

Williams battled as a pro over eight seasons, five spent in the minors and three others in independent ball. He made it up to AA, but he didn't make it higher.

Williams' career began in 1988, signed by the Cubs an undrafted free agent out of Rust College in Mississippi.

Williams started with the Cubs at rookie Wytheville. He hit .239 over 38 games, with three home runs. He then moved to single-A Charleston for 1989. In 91 games there, the outfielder hit .244.

Williams made AA Charlotte for 1992, but his time on the field there turned out to be brief. His season consisted of 19 appearances where he hit .203.

Williams is next recorded as playing in 1995, for independent East Chicago. He hit for the cycle in a June game. He also had a .481 average by late June.

"I would love to get back," Williams told The Times, "and you've got to start somewhere."

Williams ended up seeing 29 games for East Chicago that year and hitting .340, but his work didn't lead back to the minors.

He then returned to independent ball for two more seasons, 1997 and 1998. He played at Tupelo both seasons and also saw 56 games at independent Massachusetts in 1998 to end his career. 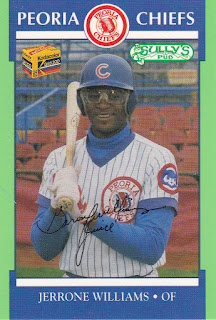