Jason Doss set records at his high school in Florida, enough so that the Cubs took notice by taking him in the 23rd round of the 1988 draft, according to The Palm Beach Post.

Doss, still 17, could hardly contain his excitement, he told The Post.

"When they called me and told me they drafted me, I almost hit the ceiling," Doss told The Post. "I was so excited. This is what I've always wanted to do."

Doss signed with the Cubs and turned pro. His career, however, was over at age 22. He played five seasons as a pro. He never made AA.

Doss' career began that year in 1988, taken by the Cubs out of Westwood High in Fort Pierce, Fl.

Doss started with the Cubs at rookie Wytheville. He went 0-2 over 18 outings, three starts. He started an August game, but got a no-decision in a game his team won.

After the season, Doss went to instructional league, The Post wrote. Doss also reported an optimistic assessment from one of his coaches.

"My curveball got better, I developed a change-up and my fastball is now at 90 mph," Doss told The Post. "My last seven innings were scoreless and the pitching coach said by the time I'm 21, I should be in the major leagues." 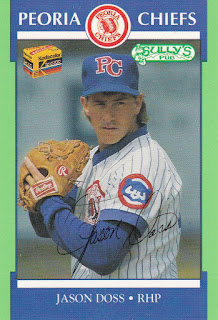