Growing up in Peoria, Ill., Curley 'Boo' Johnson got up-close looks at the Harlem Globetrotters through is father, who was close with a member of the team, according to The Frederick News-Post.

When the team came to town, Johnson got to serve as a ball boy and players stopped by the house. His father even dreamed about him playing beyond college, professionally, Johnson told The News-Post in August 2000.

"A couple months after college, I became a Globetrotter," Johnson told The News-Post then. "It's the only job I've ever had. It's who I am."

Johnson joined the Globetrotters in 1988 and he stayed with them for two decades. Along the way, the Peoria native became the "world's quickest dribbler" and he entertained children around the country and the world.

(He was also honored with a card in the 1990 Peoria Chiefs baseball team team set.)

Johnson graduated from Peoria High School in the early 1980s and went on to Spoon River College and Loras College.

He played baseball in high school, his card noted. The card also cited a pitch that hit Johnson in the head as ending his brief time playing the game.

By the time his career with the Globetrotters was over, Johnson had played on six continents and in 81 countries, according to The Norfolk Virginian-Pilot.

"How lucky can you be," Johnson told The Virginian-Pilot in 2013, "to travel like that and have the privilege of meeting Pope John Paul II, Mother Teresa, and Nelson Mandela?"

Since his retirement from the Globetrotters, Johnson has gone on to work with children through his Curley Boo Johnson Skills for Life Basketball Academy Camps.

In 2010, Johnson spoke with a Chicago-area high school team that won its league title about the importance of hard work and determination, according to The Austin Weekly News.

"Every time someone told me I couldn't do something, I did it," Johnson told the students then, according to The Weekly News. "If you don't believe in yourself, no one else will." 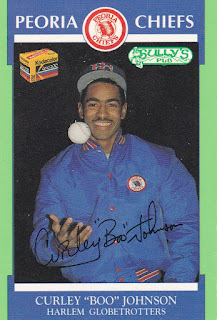