Carlos Ledezma first served as a trainer in the minors, then as a clubhouse manager in the majors

The importance centered around a simple thing, he told The Sentinel: Cash.

"I tell them that a lot of [Spanish-speaking] players miss out on a lot of money because they don't get the publicity," Ledezma told The Sentinel. "Sportswriters aren't going to waste time with a guy who can't speak much English."

Ledezma could talk. The native of Venezuela had watched over clubhouses and players to that point for more than two decades, both as a trainer and as a clubhouse manager.

Ledezma's career in baseball began in 1972, as a trainer in the Expos system. He served there for six seasons, before moving to the Mariners and then the Pirates systems.

He stayed with the Pirates system through at least 1991. In between, he managed at Pittsburgh affiliates in Hawaii, Vancouver and Buffalo.

In June 1990, he looked after Buffalo player Scott Little, who appeared to have suffered a pinched nerve weightlifting, according to The Buffalo News.

"We don't know what's going on because sometimes he feels good and sometimes he doesn't," Ledezma told The News. "There may be some infection in the nerve, but we'll just have to wait and see."

In 2006, he served as his home country's clubhouse manager for the World Baseball Classic. 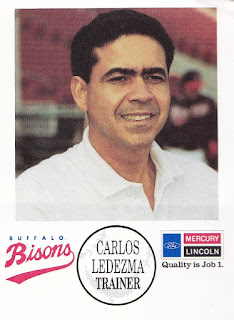