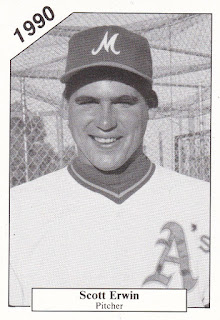 Scott Erwin was still unbeaten for Georgia Tech in May 1988 and another sterling performance helped keep it that way, according to The Associated Press.

The only blemish on the day was that Erwin couldn't finish out the contest. He went two outs into the ninth before he had to be pulled. He still picked up his 13th win to no losses, according to The AP.

"We went with Erwin as long as we could," Erwin's coach Jim Morris told The AP. "He's pitched a lot of complete games lately, so we'll stay with him a lot longer than we would somebody else."

Erwin entered the next year as one of the top college pitchers in the country. Arm problems, though, abbreviated his senior campaign. His career would also be relatively short, just five seasons. He never made it above AA.

Erwin's pro career began in 1989, taken by the Athletics in the fifth round of the draft, out of Georgia Tech.

At Georgia Tech, Erwin picked up his eighth win of 1988 while striking out 13. It was also his third-consecutive complete game. At year's end, he made the All-ACC Tournament Team. Overall, Erwin went 25-3 through his four years at Georgia Tech.

Coming off his 13-0 campaign, one where he struck out nine batters a game, Erwin's stock climbed, according to The Gainesville Sun. Shoulder problems, though, shelved him for the first five weeks. Still, he pitched well on his return. In one May game, he struck out 11 while going seven innings.

With the Athletics, Erwin played at short-season Southern Oregon. In 15 starts, he went 6-3, with a 3.36 ERA. At season's end, Erwin was named as one of the top 10 prospects in the league in a poll of managers.

Erwin moved to high-A Modesto for 1990. There, he went 6-11 over 25 starts. He then turned reliever. He split time between Modesto and AA Huntsville in 1991, getting 30 relief outings. His ERA came in at 3.28, picking up a relief win in an August outing.

In 1992, Erwin returned to Huntsville. He got 23 relief outings, getting one save. He then missed all of 1993. He made one more attempt at the pros in 1994, seven outings, five starts in the rookie Arizona League. Those seven outings were his final outings as a pro.