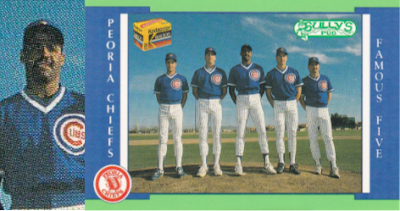 Mike Harkey appeared to be on his way to becoming the next big thing, the next big major league pitcher in 1989, then injury struck, The Los Angeles Times wrote the next spring.

His injuries then led to a mid-season surgery, but also rehab, a return to the majors in 1990 and a new understanding of the game, The Times wrote.

"I learned you can't take anything for granted," Harkey told The Times. "In this game, anything can change in the blink of an eye. There are some people who think they have this game licked, and all of a sudden it turns on them. You have to be ready for anything, because anything can happen."

He then went on to a coaching career that saw him coach in the minors and then the bigs, a career that continued in 2019 as bullpen coach for the New York Yankees.

Harkey's pro career began in 1987, taken by the Cubs in the first round of the draft out of Cal State Fullerton.

Harkey started with the Cubs between single-A Peoria and AA Pittsfield. He then played 1988 between Pittsfield and AAA Iowa.

He returned to the majors with his 12-6 campaign in 1990. But he then had abbreviated big league seasons in 1991 and 1992, with four starts and seven starts, respectively.

"We got the whole package," Cubs manager Jim Lefebvre told The South Florida Sun-Sentinel of Harkey's outing. "Harkey not only gave us innings, he gave us a complete game and a great effort. Considering the condition of our bullpen, we couldn't have asked for more."

Harkey signed with the Rockies for 1994 and then split 1995 between the Athletics and the Angels. He played 1996 at AAA, then returned for 10 final outings with the Dodgers in 1997.

Harkey started his coaching career by 2000, at high-A Rancho Cucamonga. He made AA Mobile in 2005, then reached the majors in 2006 with the Marlins as a bullpen coach.

Harkey explained his role as bullpen coach to ESPN in September 2019, saying that, while pitching coaches worry about the scouting reports, his role is as more of a psychologist.

"You're with the guys right up until the very moment they have to go in the game, and frequently it's in high-leverage situations," Harkey told ESPN. "So to be able to find out what it is that helps them relax or helps them feel more confident when they're going into the game, that's probably the biggest thing."
1990 Minor League Tally
Players/Coaches Featured:3,203
Made the Majors:1,159-36.2%-X
Never Made Majors:2,044-63.8%
5+ Seasons in the Majors: 480
10+ Seasons in the Minors:283
Posted by Steve78 at 9:45 PM