Jerry Nyman was related to major leaguers, just not the one whose name he shared

When Jerry Nyman entered the pros in 1990, he appeared to follow at least one family member into baseball.

While he has the same name as the Jerry Nyman who played in the majors from 1968 to 1970 and later spent a long career coaching in the minors, it doesn't appear that the younger Jerry Nyman was related to him.

According to The St. Louis Post-Dispatch, the younger Jerry Nyman was actually related to two other major league Nymans - Nyls Nyman and Chris Nyman. And The Post-Dispatch's write up, about new signees' relations to other players makes no reference to the older Jerry Nyman.

While Nyls Nyman and Chris Nyman each made the majors, the younger Jerry Nyman only played in the pros briefly. He played a single season at Jamestown in the New York-Penn League. He didn't get to play in a second.

Nyman's playing career began and ended that year, signed by the Expos as an undrafted free agent out of Cal State Sacramento. Nyman's formal name was credited as Gerald N. Nyman.

Nyman is credited among the Sacramento State alums to play in the pros. He played there from 1989 to 1990.

The other major league Nyman, the apparently unrelated major leaguer and coach Gerald Smith Nyman, pitched in 30 major league games from 1968 to 1970. A native of Utah, he was born in 1942.

Regardless of whether the two Jerry Nymans were related, they did have a good chance of meeting on the field. In 1990, as the younger Jerry Nyman played with the NYPL's Jamestown Expos, the older Jerry Nyman coached - for the NYPL's Welland Pirates. The two teams were even in the same division.

But the younger Jerry Nyman managed just that one season. He saw 33 games at Jamestown. He played outfield and hit .151. He picked up one double, four RBI and two stolen bases.

His Jamestown card notes he enjoyed playing golf and he counted Jack Clark and the Chicago White Sox as his baseball favorites. 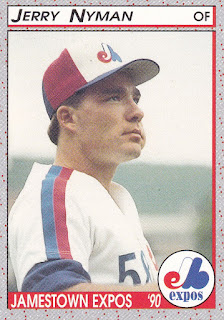