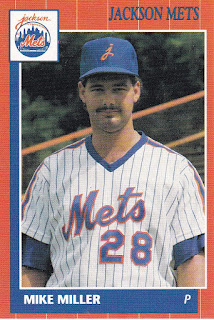 The Mets looked to possibly bring up a few players to AAA Tidewater from AA Jackson in June 1990 and one of them mentioned was pitcher Mike Miller, according to The Newport News Daily Press.

Miller was in his fourth season as a pro and had made it to Jackson. The starter was also 4-2 by that point in the 1990 campaign and had a 2.83 ERA, The Daily Press wrote.

But however seriously the Mets considered Miller for a promotion, he never received it that year or any other time. He remained at Jackson for 1990 and didn't return for 1991.

Miller's career began in 1987, taken by the Mets in the fourth round of the draft out of St. Louis Community College, Meramec Campus.

Miller started with the Mets at short-season Little Falls. He started 13 games and went 2-5, with a 4.01 ERA. In June, he gave up two hits over seven innings in one start. In August, he went eight innings and gave up three earned, but missed out on the win.