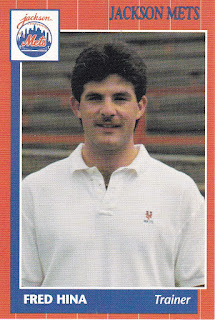 With a spot in the 2013 Final Four on the line, University of Louisville guard Kevin Ware went down with a leg injury, perhaps the most gruesome one imaginable.

Right there to get Ware the help he needed was Louisville trainer Fred Hina.

"We provided him the emergency care he needed in a timely fashion," Hina told CBS Sports afterward. "It was very well organized."

Hina had been putting his organizational skills to work for Louisville for 12 years by that point. Before that, he put them to work in the minor leagues for the Mets.

Hina's long career as a trainer began in 1987, as trainer for the rookie Kingsport Mets, after he graduated from the University of Western Kentucky with a degree in health care administration.

Hina soon moved up further, to Flushing. He served as the head athletic trainer for the Mets for seven seasons, until his move to Louisville after the 2001 season.

Among the players he watched over with the Mets was future Hall of Famer Mike Piazza. In 1999, Piazza missed the final two games of the NLDS with a thumb sprain that inflamed his thumb, according to The New York Times.

"In response to the inflammation, the proper thing is to immobilize it, to take stress off it," Hina explained to The Times.

Hina also appeared in Piazza's autobiography, "Long Shot," according to ESPN. Piazza wrote of asking Hina about human growth hormone, which Piazza didn't know was banned. Hina checked into it and returned to say he shouldn't.

In August 2001, Hina made the decision to return home to Kentucky and take the basketball trainer's job at Louisville.

"This is probably the only job in America that I would leave the Mets for now," Hina told Newsday after taking the position. "The university is only 10 minutes from my house. I get to sleep in my own bed for more than four months a year, which is nice."

Hina continues as Louisville's director of sports medicine for men's basketball in 2019.

Asked in 2008 by the site Training and Conditioning, about the hardest part of his job, Hina responded that he didn't have one.