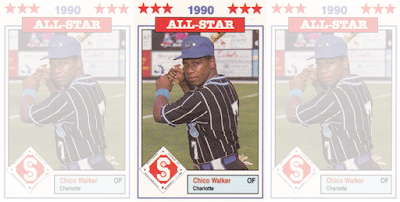 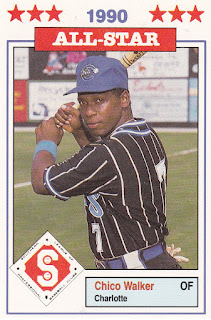 Chico Walker started strong for the Cubs in 1991. Talking to The Chicago Tribune that July, he attributed it to one thing: Playing time.

"Playing every day makes such a difference," Walker told The Tribune. "I just couldn't do it in other years, getting five at-bats here and 10 more there. Some can do it, but I couldn't. So, I'd go back to the minors and play more and hit close to .300. They called me a career minor-leaguer."

Walker was in the midst of his ninth campaign with major league playing time, but he'd never seen more than 47 games in any one season. In 1991, he saw 124.

Walker's career began in 1976, taken by the Red Sox in the 22nd round of the draft out of Tilden Tech High School in Chicago.

Walker started with the Red Sox at short-season Elmira. He made single-A Winter Haven in 1978 and AA Bristol for 1978.

Years later, Walker spoke of starting out in the Red Sox system and learning the Red Sox-Yankees rivalry early.

"It goes back to when I broke in in rookie ball," Walker told authors Harvey and Frederic Frommer for their book "Red Sox Vs. Yankees." "Every time we played the Yankee teams, the manager would try to get us up for them. From rookie ball to double A to triple A, I felt it."

Walker got his first look at the rivalry at the major league level in 1980, as a September call-up. He got into 19 games, including four against the Yankees. He went 12 for 57.

Walker then returned to the majors with the Red Sox over three of the next four years, but saw 13 games total.

The Angels returned him to the minors in July, after he batted just .154 over his 33 appearances. Walker expressed disappointment, but understanding at his demotion, noting his average compared to others' averages, according to The Los Angeles Times.

Walker then returned to the minors for two full seasons. He played 1989 at AAA Syracuse and 1990 in the minors with the Cubs. His 1990 campaign saw the former major leaguer play a majority of his time back at AA, at Charlotte.