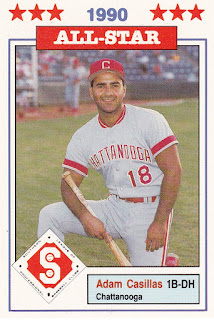 A key piece on the 1987 Salt Lake City Trappers team that won a record 29 games in a row, Adam Casillas recalled years later to The Deseret News the home of that streak, Salt Lake City's Derks Field.

"Derks Field was an amazing place," Casillas told The News. "After that season, I realized how spoiled we really were. I always loved playing in Salt Lake City. I spent almost a decade in professional baseball, and there is no prettier ballpark I've played in anywhere."

Casillas signed on with independent Salt Lake that year, having been passed over in the draft. The Trappers gave him his start and he went on to play nine seasons in the pros. He hit AAA, but he missed the majors.

Casillas went on to a career outside of baseball, in auto sales. in 2016, he passed away at the age of 50.

Casillas career started that year in 1987, signed by Salt Lake City out of Oral Roberts University in Oklahoma. Casillas was also at least once credited as Adam Cassillas.

At Oral Roberts, Casillas recorded 304 hits in 235 games played for a career average of .367. He knocked 66 doubles, scored 219 runs and knocked in 176. Casillas remains in the top 10 all-time in each of the categories at the school.

After Casillas moved on from Salt Lake to an affiliated team, Casillas' old coach at Oral Roberts University recalled to The Oklahoman his former player skills on the field.

"Adam was the most unselfish player at the plate I have ever coached," Gary Vaught told The Oklahoman. "He had tremendous confidence, even with two strikes."

Passed over in the draft due to injury concerns and given a chance at Salt Lake, Casillas took advantage. He hit .385 in 60 games, while knocking in 44. He knocked in two runs in a July game as he helped the Trappers to their 25th-straight win.

The Reds soon rewarded Casillas for his work, purchasing his contract shortly after season's end.

Casillas played most of 1990 at AA Chattanooga. He also got a seven-game look at AAA Nashville. He returned to Nashville full time for 1991, where he hit .275, with five home runs.

Casillas moved to the Royals system for 1992 and 1993, playing at AA Memphis and AAA Omaha. In August 1993, Casillas told The Tulsa World he was keeping his eyes open from a crowded Royals organization.

"I'm just trying to put a solid year together," Casillas told The World. "Hopefully there will be some opportunity. If not with the Royals, there are a bunch of other teams out there."

Casillas' next situation came in Mexico, with Monterrey. He finished out his career there in 1994 and with Reynosa in 1995.

After his passing from a heart attack in January 2016, World sports writer Barry Lewis wrote of Casillas as "one of the best hitters that I've ever seen who never got a major league shot."

Casillas was married with three children. Casillas' impact can be seen in the $35,000 raised from a YouCaring page set up after his passing to raise money for his children's education. A Casillas tribute video is on YouTube.