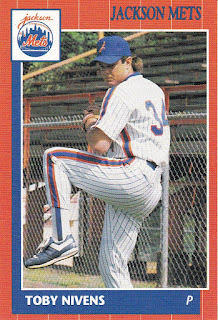 Toby Nivens quickly made AA with the Twins, but he had trouble making the next step. So, when he underwent arm surgery in his third pro season, Nivens thought his career had ended, according to The Chicago Tribune.

Then the Twins sent Nivens to the Mets in a trade. Nivens told The Tribune later that he believed that  trade kept his career alive.

''Probably the biggest thing is the Mets are more patient,'' Nivens told The Tribune. ''They stress little things more than the Twins. The Twins would take for granted that you should know something if you were at a certain level. If you didn't know it, you never learned. Here, they make sure somebody teaches it.''

Nivens then returned to AA for another season, his third at that level. He played at AA in two more campaigns after that. He never made AAA or higher.

Nivens' career began in 1986, taken by the Twins in the first round of the January secondary draft out of San Jacinto College in Texas.

Nivens started with the Twins at rookie Elizabethton. He went 9-2 over 13 starts there, with a 2.62 ERA.

Nivens had a rough start at Orlando, but he earned praise from his manager, George Mitterwald, according to The Orlando Sentinel.

"In his last four or five starts, he has pitched outstanding," Mitterwald told The Sentinel of Nivens that May. "He's 1-3, but he easily could've been 4-3. Some no-decisions and some shoddy defense have hurt him. But he's a gamer."

Nivens returned to Orlando for 1988. That June, he threw a three-hitter and had a no-hitter into the seventh inning. He went 7-7 overall, with a 3.82 ERA. Then came his arm surgery and trade to the Mets.