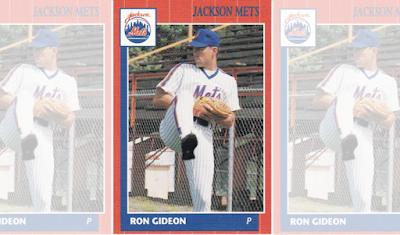 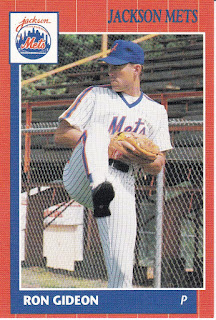 Ron Gideon agreed to try pitching in late 1988. The next spring, the Mets informed the first baseman the wanted him as a pitcher full time, according to The Jackson Clarion-Ledger.

To The Clarion-Ledger that July, Gideon explained plainly his reasons for accepting the assignment.

"When it comes to finding another job or this, I'll take this," Gideon told The Clarion-Ledger. "It's a big adjustment. I've been swinging a bat all my life, and I've loved it."

Gideon soon did have to find another job, his foray into pitching lasting two seasons. Gideon, however, didn't have to look far as he soon landed a minor league hitting coach job with the Mets.

Gideon has since gone on to a long career in both the minors and the majors as a coach, manager  and coordinator, most recently serving as first base coach for the Rockies in Colorado.

Gideon's long career in baseball began in 1984, taken by the Phillies in the first round of the June secondary draft out of Panola College in Texas. Gideon is also credited as Ronnie Gideon.

Gideon started with the Phillies at short-season Bend. He hit .270 in 66 games. He then moved to single-A Peninsula for 1985 and then the Mets and single-A Lynchburg for 1986.

By 1991, he was back in St. Lucie as hitting coach. He got his first look at the manager's office in 1993 at rookie Kingsport and he continued to manage in the minors through 2005, moving to the Rockies system in 1996.

In 2000, he managed Shawn Chacon at AA Carolina. He later explained to The Greeley Tribune Chacon's path to the majors.

"I think it was primarily a mental thing, but he had some mechanical problems, too," Gideon told The Tribune. "In the past, he's been able to live on power alone, and he likes being a power pitcher. But success at this level will come with location and finesse, too."

Chacon served as a minor league field coordinator and then as manager at AA Tulsa.

When he joined Tulsa for 2009, Gideon received praise from Rockies assistant GM Bill Geivett in The Tulsa World.

"It's great when you can call on someone with Giddy's experience to step in when you have an opening," Geivett told The World.