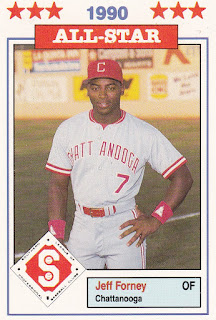 Jeff Forney and his Florida Atlantic University teammates got an unusual honor in 1985. They got to play in the spring training home of a major league team, the Rangers, according to The South Florida Sun-Sentinel.

The surrounds left Forney among those with some added motivation, The Sun-Sentinel wrote.

"The atmosphere's nice," Forney told The Sun-Sentinel. "Playing in a professional stadium gives you an extra incentive, a real motivation pump. It's a taste of the big leagues."

Forney's pro career began in 1985, taken by the Reds in the first round of the June secondary draft out of Florida Atlantic. He attended Science Hill High in Johnson City, Tenn.

With Science Hill, Forney helped his team to the 1982 conference title. Forney hit a home run in the title game. More than three decades later, Forney credited the team's success to its coach.

"He was just an outstanding coach," Forney told The Johnson City Press of Coach Charlie Bailey in 2014. "He really forced us to play fundamentally sound. We worked on the fundamentals. It was all about doing the little things."

Forney took those lessons on to college and the pros.

Forney arrived at single-A Cedar Rapids for 1988. He hit .282 on the year and made the Midwest League All-Star Team. He knocked in what turned out to be the winning run in a May game on a ground out.

Forney moved up to AA Chattanooga for 1989, but got into only a single game where he earned a walk. He then returned for 1990 and played a full season where he again became an All-Star. He hit .278 over 122 games overall, ending his career.

Forney has since settled in Arizona. He helped develop a baseball instructional TV show, Baseball Player University, there in 2006. That continues in 2017. He also continues to run Triple Threat Elite Performance Center in Gilbert, Ariz.

"If they get anything out of it, I hope they realize it is not just about playing the game," Forney told The Arizona Republic in 2006 of the TV show. "There are life skills to be learned. It can teach you to be so many things, including being humble and gracious. Enjoy the moment because the whole reason to play the game is to have fun."