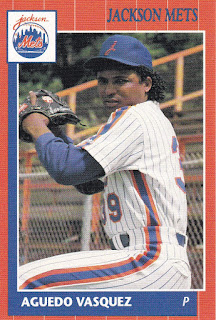 Aguedo Vasquez made the Royals spring roster in early March 1989 and The Kansas City Star called that significant.

It was significant because Vasquez and another player on the roster were graduates of the Royals' baseball school in the Dominican Republic, The Star wrote.

"It's the Latin American answer to our old Baseball Academy program," general manager John Schuerholz explained to The Star.

Vasquez used his start in the Royals' baseball school to make the pros in the United States. He later made AAA, but he never made the majors.

Vasquez' pro career began in 1987, signed by the Royals out of his native Dominican Republic.

Vasquez started with the Royals between single-A Fort Myers and the rookie Gulf Coast League. He went 1-1 between them in 11 relief outings, with a 5.60 ERA.

Vasquez then broke out at single-A Baseball City in 1988. He got into 62 games, with a 1.67 ERA. He also saved 33 and earned a two-game look at AAA Omaha. He gave up four earned in four innings there.

His work at Baseball City in 1988 earned him league MVP honors at year's end.

Vasquez then moved  to the Mets for 1990 and AA Jackson. He got into 53 outings there, with a 3.36 ERA. He also saw three outings at AAA Tidewater. He gave up two earned in 3.2 innings of work there.