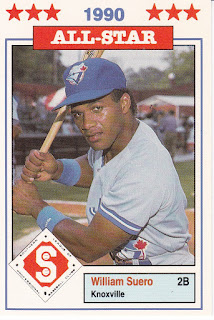 William Suero started the spring well for the Brewers in 1993, picking up nine hits in his first 13 at bats, The Milwaukee Sentinel wrote.

It was enough for the non-roster to get the notice of Milwaukee's manager Phil Garner, according to The Sentinel.

"He hasn't hit a ball soft yet," Garner told The Sentinel of Suero. "He's been tattooing the ball."

Suero already saw Milwaukee for 18 games the previous year and he would make Milwaukee again in 1993. But his stay there would again be brief, 15 games, with 14 at bats. Those two seasons marked the extent of Suero's big-league career.

Suero's career began in 1985, signed by the Blue Jays as an amateur free agent out of his native Dominican Republic.

That August, Suero was sent to the Brewers to complete an earlier trade. He finished the year at AAA Denver, scoring the Triple-A title-winning run.

Suero didn't get the call-up to Milwaukee that September. But he did get the call out of the next spring, making his major league debut April 9. And he stayed up through mid-May, getting more time in late June. He ended up getting three hits in 16 at bats.

Returning for 1993, Suero got into two April games, then made it back for June and part of July. In all, he got four hits in 14 at bats.

Suero moved to the Pirates system for 1994, playing much of the year at AAA Buffalo and the rest at AA Carolina. It was his final year as a pro.

The next year, in November 1995, Suero's life ended, killed in a car crash in his native Dominican Republic.