Will Magallanes, From Injury - 3 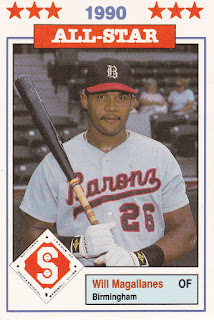 Single-A Daytona Beach didn't play well to start 1987 and Daytona owner Blake Cullen looked to returning prospect Will Magallanes to get the offense going, according to The Orlando Sentinel.

"We've lost 26 1-run games," Cullen told The Sentinel that July after Magallanes had a hot start. "You just know a player like that could have turned a bunch of those around."

Magallanes was in his third professional season that year with the White Sox, coming back from an injury to his ankle suffered that spring.

Magallanes ultimately would play in six seasons in the White Sox organization, never seeing Chicago. His stint with the club would also end in an ugly incident where Magallanes intentionally caused an injury to a teammate, using a bat to do so.

Magallanes' career began in 1985, signed by the White Sox as an undrafted free agent out of his native Venezuela. Magallanes has also been called Willie Magallanes and the more formal William Magallanes.

With the White Sox, Magallanes started in the rookie Gulf Coast League, hitting .208 in 30 games. He then played 1986 between single-A Appleton and single-A Peninsula, hitting .242 between them.

Returning for 1987, Magallanes played the season at Daytona, getting into 69 games, hitting 11 home runs over that span. Magallanes had nine of those home runs by early August.

For 1988, Magallanes moved up to AA Birmingham, playing the year there. He hit just .193, with nine home runs. He knocked in the winning run in a May game with a ninth-inning single. He then hit one of his home runs in a July game at Charlotte.

Magallanes then took a step back for 1989, to single-A Sarasota. His average recovered, though, to .295. He then returned to Birmingham for 1990, hitting a solid .292 on the season. But it was his final year with the White Sox, the bat incident at year's end likely having something to do with that.

It was on the Birmingham bus that Magallanes got into a fight with teammate Todd Trafton, according to The Associated Press. Once off the bus, Magallanes ended the fight, picking up a bat and hitting Trafton in the back of the head, resulting in Trafton getting 12 stitches.

"The doctor told me that an inch higher or an inch lower and I might not be walking now," Trafton told The AP afterward. "I'm fine, but I have an awful headache."

Magallanes apparently was never charged. But his career in the White Sox organization was over.

He caught on with the Cardinals for 1991, getting 41 games at AAA Louisville. In 1992, he is credited as playing in Mexico, then 1993, seven games at AA Orlando. His last credited time came in 1995, with Tabasco of the Mexican League.