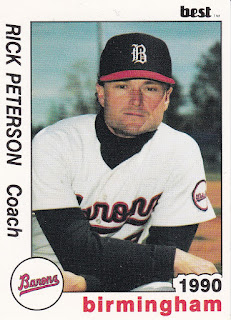 Peterson learned his craft to that point over a career that had spanned more than four decades. He played in eight professional seasons, never making the majors.

He then went on to a long coaching career that saw him first make the majors as a bullpen coach and then spend a decade in the bigs as a pitching coach.

Peterson's career began in 1976, taken by the Pirates in the 21st round of the draft out of Jacksonville University in Florida.

Peterson entered the pros as the son of a former major leaguer. His father Hardy Peterson played parts of four seasons with the Pirates.

Peterson started with the Pirates at short-season Little Falls. He moved to single-A Charleston and single-A Salem for 1977. He went 4-4 that year over 31 outings, four starts.

He started his coaching career by 1982 at AA Buffalo, though he saw five more appearances on the mound through 1988.

He served as pitching coach at AA Waterbury in 1986. then AAA Buffalo in 1987. He spent three seasons at AA Birmingham, then returned to AAA in 1992 with Vancouver.

Peterson arrived in the majors in 1994 as White Sox bullpen coach. He stayed there two seasons and returned to the bigs in 1998 as pitching coach in Oakland.

Peterson moved to the Mets as pitching coach for 2004.

"Rick's record of success as a pitching coach speaks for itself," Mets GM Jim Duquette said upon hiring Peterson. "He brings an approach and a passion to the job which will be a tremendous plus for our organization."