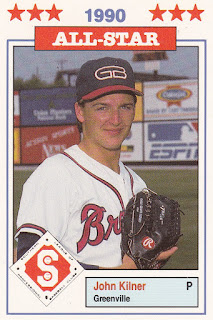 John Kilner wasn't pitching up to his own expectations, he told The Sumter Daily Item in 1987 and he knew one thing he needed to work on.

"Consistency," Kilner told The Daily Item of his problem the previous year. "Some days I would go out and pitch well and the next time not so well. I just have to be more consistent."

Kilner became consistent over the next few years, just not the consistency that he hoped for. He played that year at AA Greenville. He also played the next three there. He got a brief look at AAA, but he never made the majors.

Kilner's career began in 1983, signed by the Braves as a free agent out of Cleveland State University.

That May in 1985, Kilner worked into the seventh inning of a game and struck out 15 batters, according to The Daily Item.

"Kilner had good velocity today and good control," Sumter manager Buddy Bailey told The Daily Item. "They might have helped him out some by swinging at some high pitches, but he kept the ball around the plate. His pitches seemed to have good movement on them."

He got 30 outings at Greenville that year. He also saved a playoff game that sent the team to the Southern League championship series. He did so getting two eighth-inning strikeouts with the bases loaded, according to The Associated Press.

Kilner has since returned to the Cleveland area, where he is listed in 2015 as an instructor at All Prospect Sports Training in Valley View.