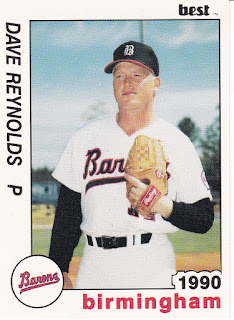 Mid-way through the 1991 season, Dave Reynolds' wife Marsha spoke with The Sarasota Herald-Tribune about life in minor league baseball, and the possibility of life without it.

Her husband was in his seventh season as a pro, and he'd just come back from rotator cuff surgery. On the other end of things, he was also nearing a degree in education.

"Next year will probably be the decisive year for us," Marsha Reynolds told The Herald-Tribune.

Whether it was a voluntary decision, or involuntary, by the next year, Dave Reynolds' career was over. It was over with Reynolds never making it above AA.

Reynolds' career began in 1985, taken by the White Sox in the 22nd round out of Northwestern State University of Louisiana.

With the White Sox, Reynolds started in the rookie Gulf Coast League. The eventual pitcher also started as an infielder. In the GCL, Reynolds got into 35 games, hitting just .202. He played third, short, and got one outing on the mound.

Going into 1986, Reynolds made the switch to pitching. He learned of the switch, according to Sports Illustrated, simply by being told he was now a pitcher. The move paid off, according to SI, as he made the Midwest League All-Star team with Appleton.

In 1989, Reynolds split time between single-A Sarasota and his first look at AA Birmingham. In 13 outings, seven starts, at Sarasota, Reynolds went 4-2, with a 3.66 ERA. In April, Reynolds threw a three-hit shutout against Fort Lauderdale. In May, he went 4.1 innings of relief, giving up just a single hit.

His final year came in 1991, getting into 25 games between Sarasota and Birmingham. He posted a career-best 1.79 ERA, but it was his last year in pro ball.