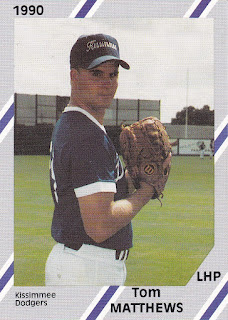 But what impressed the scout most, Miske told The Post-Gazette was Matthews' attitude on the mound.

"He has the fire that is hard to find in someone his age," Miske told The Post-Gazette. "He is a very tough competitor."

Matthews took his competitiveness to the pros that year in 1990. But it couldn't get him a long career. His career consisted of that single season.

Matthews' career began and ended that year, taken by the Dodgers in the 46th round of the draft out of Edinboro University in Pennsylvania. He played his high school ball at Moon Area High in Coraopolis, Pa.

Matthews played his season with the Dodgers in the Gulf Coast League, at Kissimmee. By mid-August, he was 3-2. He picked up his third win on a start where he gave up two earned and a walk, along with nine hits.