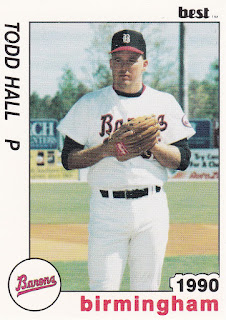 Todd Hall had his own basic way of breaking in his gloves.

The gloves he got as part of a small minor league endorsement deal with Rawlings, two came each year, Hall recalled to The Lima News in 2009.

"I heard of guys soaking them in shaving cream or hanging them in the shower," Hall told The News. "I put oil on it, put a ball in there, wrapped it up and casually broke it in. I wasn’t going to put a $200 glove soaking in the shower."

Hall's career began in 1986, taken by the White Sox in the 14th round of the draft, out of Bowling Green State University.

He played his first season in the rookie Gulf Coast League. The pitcher went 6-2 there, with a 2.22 ERA. He also struck out 58 in 73 innings of work.

Hall picked up one Sarasota win in July, going eight innings, giving up two runs. A week later, he threw a four-hitter in a 7-2 win, The South Florida Sun-Sentinel wrote.

In late August, there was talk a Hall brush-back was something more. But Hall told The Sarasota Herald-Tribune it was nothing more than good pitching.

"You try to work someone who crowds the plate like that," Hall told The Herald-Tribune. "That's what a pitcher does on this level, on any level in the majors."

Hall got just one more year, though, making AA Birmingham in 1990. There, Hall served as a reliever again, with a 4.19 ERA in 33 outings.