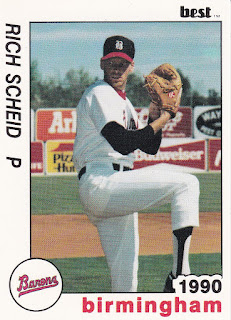 By July 1994, the Marlins had brought up seven other pitchers from AAA Edmonton. The eighth, The South Florida Sun-Sentinel wrote, was Rich Scheid.

"I was kind of getting disappointed, since so many had been called up," Scheid told The Sun-Sentinel of the long wait. "I was getting down a little bit. But you keep your head up, keep a good frame of mind and good things can happen."

Scheid's professional career began in 1986, taken by the Yankees in the second round of the draft, out of Seton Hall.

He played that first year at short-season Oneonta, going 9-3 in 15 starts. He then made single-A Fort Lauderdale and AA Albany-Colonie in 1987. He then moved to the Cubs and AA Pittsfield in a mid-year trade.

Scheid first made AAA in 1989, with seven relief outings at Iowa. He gave up four earned there in 7.1 innings of work. For 1990, he moved to the White Sox, splitting time between AA Birmingham and AAA Vancouver.

In mid-1992, Scheid was traded again, to the Astros. That September, he made his major league debut. In seven outings, one start, with Houston, Scheid gave up eight earned in 12 innings of work.

For 1993, Scheid signed with the Marlins, but played the year at AAA Edmonton. He then returned to Edmonton to start 1994. Called up in July, Scheid had those first two quality starts. All he had to show for them, though, was no wins and one loss.

"I'm happy to have pitched well," Scheid told The Sun-Sentinel after that second start. "Yeah, I'd like to get that first win. But after where I've been, having two quality starts in the major leagues is a big boost."

Scheid ended up with eight outings with the Marlins that year, five starts. He posted an ERA of 3.34, picking up a single win and three losses. The win ended up being his only one in the majors.

He returned to the Marlins for six relief outings in 1995, giving up seven earned over 10.1 innings of work, ending his major league career.

Scheid has since returned home to New Jersey. He's also continued in the game, serving with the local Mercer County American Legion baseball league. In 2008, he served as manager of the Hightstown's Post 148 team. That June, his team took a tough loss to start a series.

"You take the good with the bad," Scheid told The Trentonian after that game. "I told the players, 'We've won games like this before. We'll have to play better against them Monday and Tuesday."