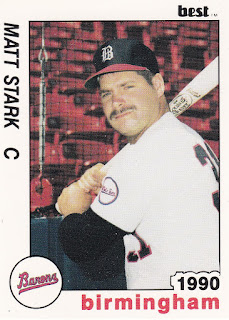 Coming off rotator cuff surgery, Matt Stark knew he'd be back to old form, he told The Associated Press in spring 1989, in camp with the Braves.

In fact, he was certain of it - once he was 100 percent, he knew he'd be a longtime catcher with some team, Stark added to The AP.

"You have to have a positive attitude, have confidence," Stark explained to The AP. "I'm a go-get 'em type guy."

By that point, the former first-round pick for the Blue Jays had five total major league games behind him, two years earlier with Toronto.

Despite his confidence, Stark wouldn't make the Braves that year. He made the majors again, in 1990, but for only eight final games with the White Sox in Chicago.

Stark did end up being a longtime player though - in Mexico. He went on to play much of the 1990s there, last recorded on the field in 1999.

Stark's career began in 1983, as the Blue Jays' top pick, taken out of Los Altos High School in California.

Stark started at rookie Medicine Hat, hitting .282 in six games. He moved to single-A Florence in 1984, then saw his first brief time at AA Knoxville in 1985.

He debuted going 1 for 3 against Cleveland. Five base runners, though, successfully stole on the catcher Stark. Stark told UPI that he didn't catch the runners, but he also called a good game and didn't let any balls get past him. The Blue Jays also won the game.

"But watch out," Stark told UPI. "As soon as I get that first runner out, I won't be stopped."

Stark got his first runner out two days later, gunning down Boston's Dwight Evans. It ended up being the only runner Stark threw out. Stark stayed with the Blue Jays through mid-month, getting into five games. He also got just that one hit.

Stark's time in the minors was then limited to 25 games by that rotator cuff surgery. He played 1988 back at Knoxville again, getting into 97 games and hitting .266.

For 1989, Stark landed with the Braves, taken in the rule 5 draft. His early confidence, though, ended with his release before the spring was out. He isn't recorded as playing anywhere else that year.

For 1990, though, Stark signed with the White Sox, playing the year at AA Birmingham. He made it back to the majors in September, getting into eight games as a pinch-hitter and DH. He went 4 for 16, with one of his hits a two-run double.

Stark played one more full year in affiliated ball, at AAA Vancouver. His last affiliated time came in 1992, with 16 games at AA Midland. Stark then started his career in the Mexican League, with Veracruz and Mexico City.

Stark continued playing in Mexico through 1999, stopping along the way to play at independent St. Paul in 1994 and 1995, and at independent Bridgeport in 1999.

Stark has since gone on to be a coach and a scout. Most recently, Stark served as manager for the independent McAllen Thunder in 2011.