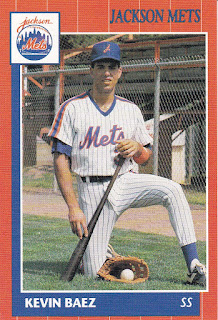 Kevin Baez had just been called back to the majors in April 1992 when the Mets' regular shortstop went down, The New York Times wrote.

Baez then found himself in the middle of the game-saving double-play - and hurt his own finger in the process, getting blood on the incoming runner's helmet, The Times wrote.

Baez showed guts enough to make the majors over three seasons, for 63 total appearances. He's gone on to a career as a manager in independent ball.

Baez' career in baseball began in 1988, taken by the Mets in the seventh round of the draft out of Dominican College in Orangeburg, NY.

Baez hit .233 at Jackson, but still got a call up directly to Flushing that September. He saw five games and went 2 for 12.

Baez continued playing in the minors for much of the next decade, without returning to the majors. He went through the systems of the Orioles, Tigers, Twins, Reds and Mets.

In 2002, he got his first look at independent ball with the Long Island Ducks. He played with Long Island over four seasons. He saw his final time in 2005.

He then turned to coaching with the same Long Island squad. In 2010, the team made him manager.

"As we head into our 12th season, we are excited to have Kevin lead our team," Ducks owner Frank Boulton said in a statement, according to Newsday. "He brings a wealth of experience as a player and a coach, and I am certain he will enjoy great success at the helm."