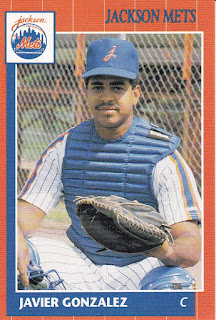 Javier Gonzalez had a big day in this August 1993 game and his team got the win, according to The Associated Press.

Gonzalez knocked in three, two of them on a home run, as Binghamton went on to take the victory, 7-6, The AP wrote.

Gonzelez hit that home run in his eighth season as a pro. He went on to play in two more campaigns. He made AAA, but he never made the majors.

Gonzalez' career began in 1986, signed by the Mets as an amateur free agent out of his native Puerto Rico.

Gonzalez started with the Mets at rookie Kingsport. The catcher got into 25 games and hit .291,  along with five home runs.

Going into 1993, Gonzalez stayed with the big club in spring training until March 21, when he was sent to minor league camp. He started the year at Binghamton, where he hit a home run in an April game.

Gonzalez played at AAA Norfolk for 17 games in 1994, his last with the Mets. He then saw 30 games with AA New Britain in the Red Sox system that year and 43 at AAA New Orleans in the Brewers system for 1995 to end his career.