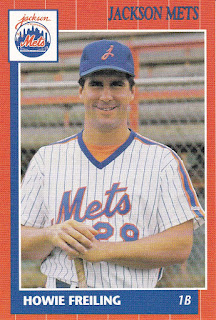 The Dodgers cut him that spring and offered him a coaching job, The Daily News wrote. Freilling declined

"I appreciated that, but I still wanted to play," Freiling told The Daily News.

Freiling soon caught on with the Mets and played the year at AA Jackson. He returned to the field the next year and briefly saw AAA. But that's as far as Freiling got as a player.

He then started his coaching career. Frieling has gone on to be a coach and a scout. Among the players he coached in the minors was a young Jose Reyes.

Freiling's career in baseball began in 1987, taken by the Dodgers in the eighth round of the draft out of the University of North Carolina.

He went on to serve as coach at AAA Norfolk for 2000, then spent that September in Flushing. He declined a spot at the World Series in favor of being with his pregnant wife.

"I think he's the real deal," Freiling told The Middletown Press in July 2002. "There really isn't anything he can't do. It's just a question of being consistent, gaining more experience and letting him grow up a little bit."