Doug Kline, Everyone There - 2 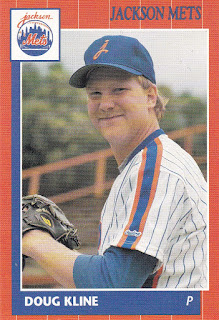 Doug Kline made the Florida State League All-Star team in 1989 on the strength of a 7-2 first-half record and a 1.70 ERA, The Palm Beach Post wrote.

To The Post, the third-year pro made an observation about the strength of his teammates and opponents in that game.

"Everyone here has got a shot (at the majors), I guess," Kline told The Post.

While some of those players did go on to the majors, Kline never made it there himself. Kline played six pro seasons. He made AAA, but not the bigs.

Kline's career began in 1987, taken by the Twins in the 13th round of the draft out of the University of Portland.

The Twins selected him after he went 9-4 and put up a 3.15 ERA as he won first-team all-conference at Portland in 1987. His 3.17 career mark at the school remains eighth all-time there.

Kline started with the Twins at rookie Ellizabethton and single-A Kenosha. He went 6-3, with a 4.13 ERA on the year.

He pitched for Kenosha in the Midwest League playoffs that September and took the win with 6-plus shutout innings, according to The Kenosha News.

"That was my best slider of the season," Kline told The News afterward. "I finally had that slider. I've had it before but this was the best. And when you can throw it like that, it makes your curve and fast ball that much better."

He saw AA Williamsport and AAA Tidewater for 1991. He went 2-0 in two relief outings at Tidewater.