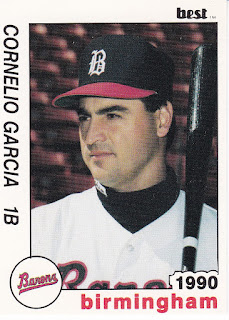 In congratulating Cornelio Garcia on his achievement, his old team the Monterrey Sultanes noted his numbers, according to a Google translation.

Garcia played 19 seasons in the Mexican League, that's in spite of five seasons spent entirely in the United States, playing in the White Sox organization. In those 19 seasons, Garcia scored more than 1,100 runs, picked up nearly 2,100 hits, stole 340 bases and hit .345.

Garcia's achievement in May 2013, was his induction into the Mexican League Hall of Fame.

Overall, Garcia's playing career is credited as spanning nearly a quarter century, from 1984 to 2007. But, while he had much success in his native Mexico, in the United States, he only had enough success to get him to AA.

Garcia's professional career began in 1984, signed by the White Sox as an undrafted free agent out of his native Mexico.

Garcia is credited that year with his first playing time in the Mexican League, with Yucatan. With the White Sox, he played in the rookie Gulf Coast League, hitting .266 in 54 games.

Garcia returned to single-A in 1987, playing the bulk of the year at Peninsula and 15 games at single-A Daytona Beach. In 1988, Garcia played at single-A Tampa and got his first look at AA Birmingham.

At Tampa in 1988, Garcia hit .282 in 70 games, stealing 23 bases. He also earned a slot in the Florida State League All-Star game. By early July, he was at Birmingham, going 3-for-5 and knocking in two in a game against Columbus.

Garcia played all of 1989 at Birmingham, hitting .271 in 128 games, stealing 35. His 1990 season, though, would prove to be his last in the United States. Garcia returned to Birmingham, but played just 25 games.

The rest of 1990, Garcia played back in the Mexican League, with Yucatan. And the Mexican League is where he stayed for the next 17 seasons. He played for Yucatan, Monterray, Union Laguna and others. He is last recorded as playing with Monterray in 2007.

Garcia's was inducted into the Mexican Hall of Fame with the second-highest vote total for 2013. His induction is to take place in September.