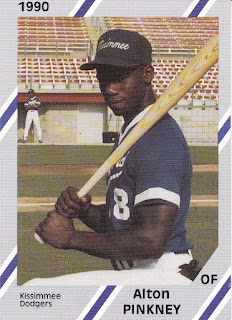 Alton Pinkney helped his Vero Beach Dodgers extend the lead in this June 1992 game against St. Lucie, according to The Palm Beach Post.

Pinkney knocked a single in Vero Beach's three-run fifth inning, then came around to score on a sacrifice fly, The Post wrote.

Pinkney scored in that game in his third season as a pro. He could only extend his career for a season beyond that. He played four seasons. He never made AA.

Pinkney's career began in 1990, taken by the Dodgers in the sixth round of the draft out of Glynn Academy in Georgia.

At Glynn, Pinkney was counted among the club's top hitters, hitting .371 in 1988, then .323 in 1989. The Brunswick News later gave him an honorable mention as among the area's top athletes of the 20th Century.

Pinkney started with the Dodgers in the rookie Gulf Coast League, at Kissimmee. He hit .167 in 35 games.

Pinkney arrived at Vero Beach to start 1992, then returned to Yakima. He stole 38 bases that year, while hitting .261.