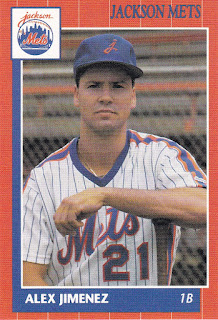 The St. Lucie Mets weren't that old, having been born born the previous season, but Alex Jimenez' team record was a team record.

Jimenez singled in the fifth inning of this July 1989 contest, marking the 14th-straight game in which he'd gotten a hit. The single also tied the club record set that same season by Titi Roche, according to The Palm Beach Post.

Jimenez went on to have at least one other modest hitting streak the next season at AA Jackson, one that reached at least seven games. Jimenez, however, couldn't hit enough to make the majors. He made AAA, but no higher.

Jimenez' career began in 1986, taken by the Mets in the first round of the June secondary draft out of Miami-Dade College.

Jimenez started with the Mets at short-season Little Falls. He got into 11 games and went 6 for 28.

He moved to single-A Columbia and returned to Little Falls in 1988. He singled in a May game for Columbia and went 1 for 4 with an RBI in an August game with Little Falls. He hit .266 overall, with 12 home runs.

At St. Lucie in 1989, Jimenez played in 42 games and hit .327. He played the other half of the year at Columbia. He doubled in a run in another July game, marking his 13th in his streak that year.

Jimenez saw a promotion to AA Jackson in 1990. He went 3 for 4 with a home run in a May game pushed across two in a July contest when a grounder went through the fielder's legs. He had his seven-game streak that year in July.