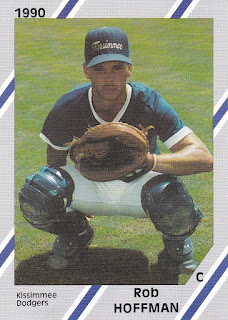 Playing on his first professional team across the country from where he grew up, Rob Hoffman knew being away from home was hard, he told The Orlando Sentinel in July 1990.

But the Gulf Coast League Dodger also knew it was something players got used to, he told The Sentinel.

"Everyone seems to have made the adjustment," Hoffman told The Sentinel of his rookie-ball teammates. "For a team that hasn't been playing together long, we've done pretty well so far. Every step you move up the players are as good as you are. We're using each day as a learning experience."

Hoffman may have used each day as a learning experience, his days in the pros were numbered. Hoffman played only that single season. He didn't return for a second.

Hoffman's career began and ended that year, signed by the Dodgers out of Contra Costa College. Hoffman was also credited by his formal name, Robert Hoffman.

He was taken by the Dodgers the previous year in the 54th round and the club initially showed interest as he graduated from Richmond, Ca.'s Kennedy High School. They took him then in the 60th round.