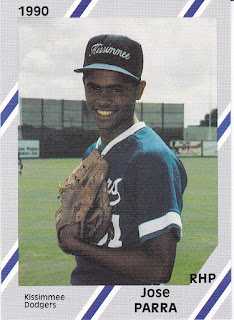 Jose Parra picked up the first win of his major league career for the Twins against the Angels in August 1995 and he looked ahead for more, according to The Associated Press.

"I want it to be the first of many," Parra told The AP after the win. "I hope it's the start of a good career."

Parra's career began in 1990, signed by the Dodgers as an amateur free agent out of his native Dominican Republic.

Parra started with the Dodgers in the rookie Gulf Coast League. He went 5-3 over 10 starts, with a 2.67 ERA.

Parra debuted for the Dodgers in May 1995. He saw eight relief outings there, giving up five earned in 10.1 innings. The Dodgers then traded him to the Twins at the deadline. He went 1-5 in 12 starts down the stretch, with a 7.59 ERA.

"It's been a long time for me," Parra told The New York Times after that win. "A long time."