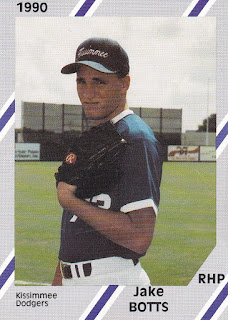 Jake Botts one-hit one team at California's North Monterey County High School in 1989 then he did it one better about two weeks later: He threw a no-hitter, according to The Santa Cruz Sentinel.

"I felt really good," Botts told The Sentinel after the no-hitter. "I had good movement on my fastball and I had all my breaking pitches working."

Botts pitched well enough in high school to get a direct look at the pros. His minor league career lasted three seasons. He never made single-A.

Botts' pro career began in 1990, taken by the Dodgers in the ninth round out of North Monterey County.

Botts started with the Dodgers in the rookie Gulf Coast League, at Kissimmee. He got into 15 games, started seven and went 5-5, with a 4.60 ERA.