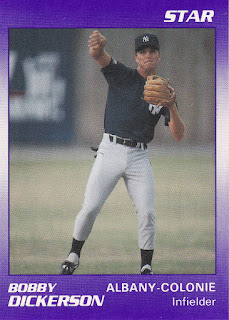 Speaking years later about his manager in the Yankees system, Bobby Dickerson credited that manager with helping him improve as both a player and a pro.

"He taught me to be professional, how to respect the game, and the effort that I was going to have to make," Dickerson told MLB.com in August 2010. "I know I got the most out of my talent. And our young players will get the most out of their abilities."

Dickerson was then manager at the Orioles' AAA team in Norfolk. He was speaking about his old manager at AA Albany Buck Showalter, then the newly named manager in Baltimore.

Three years later, Dickerson would be back serving under his old manager, named Orioles third base coach for 2013.

Dickerson's career in baseball began in 1987, taken by the Yankees in the 23rd round of the draft, out of Nicholls State University in Louisiana.

With the Yankees, Dickerson played his first season between short-season Oneonta and Showalter's single-A Fort Lauderdale. He hit .216 over 31 games.

For 1988, Dickerson returned to Showalter's Fort Lauderdale, hitting .246. He hit a bases-loaded double in a June contest. In an April game, he had three doubles, knocking in three.

In 1989, Dickerson split 45 games between AA Albany and AAA Columbus, then played 58 games at Albany in 1990. For 1991, Dickerson moved to the Orioles system, playing there through 1993, ending his playing career without making the bigs.

In his final year, Dickerson served as a player-coach. He then moved into other positions with the Orioles, including managing at rookie Bluefield for 1996 and 1997.

He moved to the Diamondbacks system for 1998, becoming manager at AA El Paso for 2000. He then moved to the Cubs system for 2002, managing at AA West Tennessee. In August 2002, Dickerson spoke to The New York Times about one of his players struggling with expectations.

"A lot of times they wear all those things that were written about them out on the field," Dickerson told The New York Times. "It's tough with all those expectations."

After a stint as a Cubs minor league coordinator, Dickerson became manager at AAA Iowa in 2009. He then moved to the Orioles and Newark for 2010.

For 2013, he was named third base coach in Baltimore, under Showalter. Dickerson had also just made the major leagues.

"It’s just an honor," Dickerson told The Baltimore Sun after his selection. "I'm like a lot of guys in the minor leagues, I've paid my dues. I've tried to do it the right way, the best I could. ... To be chosen, it's just a very nice gesture. And, again, at this time I know we have to go win and it's going to be a big responsibility and I am ready for it."