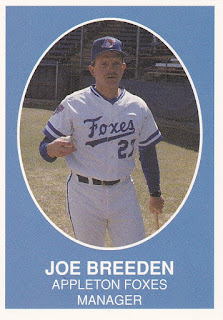 The basics of the catching position, Joe Breeden told Baseball America in 2008, are the ability to block the baseball, receive it and throw it.

"Those three things are the three most important," the Braves catching coordinator told Baseball America. "I'm not saying it's not important as far as tag plays, fielding bunts or pop-ups, but if you aren't very good at those three right there, it's going to be hard to proceed further."

Breeden learned those fundamentals of catching during his more than three decades in the game. He's served that time as catching instructor, minor league manager and a brief stint as a player himself.

Breeden's career in baseball began in 1979, signing with the Expos out of his native Virginia.

His playing career consisted of a single season with the Expos rookie-league club in Calgary and another with single-A Rocky Mount. The catcher hit .255 his first year and .190 his second.

From there, Breeden moved into coaching. He started in high school, then moved to the college ranks in 1984 as an assistant coach at Virginia Commonwealth, according to his ProCards card. From 1985 to 1988, he served as head coach at William and Mary.

Then, in 1988, he moved back to the pro ranks with the Royals. He started managing single-A Virginia, then moved to coaching at AA Memphis. For 1990, he moved to manage single-A Appleton.

That July, Breeden had the task of taking out a starter with a no-hitter intact. Breeden stayed with Appleton and the Royals through 1991. He then moved to the Marlins as the new team's minor league catching instructor.

In 1994, Breeden's task was helping catcher Benito Santiago get his catching career back on track, The South Florida Sun-Sentinel wrote.

"Benito's really worked hard," Breeden told The Sun-Sentinel that March. "Every day he's been giving me a great effort. Now, he's coming to me and saying, `What are we going to do today?' That's all you can ask."

Breeden continued with the Marlins through 2001. He served as major league bench coach three of those seasons and bullpen coach in two.

He then went through the Yankees system, as coach and manager at high-A Tampa, served as major league coach with the Blue Jays in 2004 and catching coordinator with the Reds in 2006.

In 2007, Breeden arrived with the Braves, a job he continues for 2014. One of the catchers with whom he's worked with the Braves has been Evan Gattis. In February 2012, Breeden told The Atlanta Journal-Constitution of the Gattis he saw. He also got Gattis to improve his game by losing weight.

"He works his butt off," Breeden told The Journal-Constitution. "You see him he's in there every morning in the weight room, not just lifting but stretching and flexibility. He needs more flexibility to be able to move the way he needs to move. Losing the weight has allowed him to move…. To me he's improved the most with his arm, just the accuracy and being able to have true carry all the time. It's getting better and better."