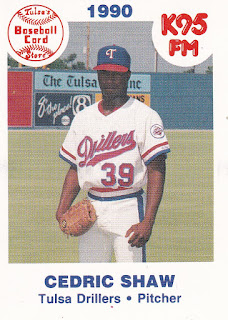 Cedric Shaw went out and threw a complete-game, five-hitter for single-A Charlotte in August 1989, a performance that impressed his manager Bobby Jones, according to The Sarasota Herald-Tribune.

"He pitched a heckuva game," Jones told The Herald-Tribune afterward. "Cedric knew what he wanted to do and went out there and did it."

Shaw went 10-6 that year, with a 2.72 ERA. He played that year in his second season as a pro. He went on to see time in seven seasons. He made AAA, but not the majors.

Shaw's career began in 1988, taken by the Rangers in the 12th round of the draft out of Grambling State University.

Shaw started 1990 at AA Tulsa. He also took the team's first start of the year, according to The Tulsa World.

"They are all pretty even," Tulsa manager Tommy Thompson told The World before that first game. "I feel Cedric is ready for the challenge of starting the opener. He throws strikes. He's reliable and has good stuff."

Shaw returned to Tulsa for 1991, going 9-8, with a 4.06 ERA. That April, Shaw went seven innings of no-hit ball and his relievers finished the job for a combined no-hitter.