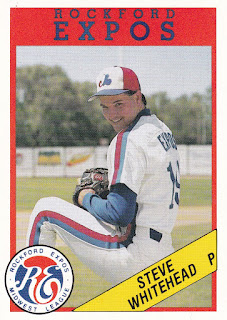 Part of the reason it was close was two runs off a fifth-inning error, according to The Imperial Valley Press.

"We know that we're going to make errors. Even pros make them," coach Whitehead told The Press, before referencing his starter, Aldo de la Trinidad. "But we've got to minimize the physical errors, especially when Aldo's pitching."

Whitehead knew pros made errors because he saw it first-hand. Whitehead played as a pro for five seasons himself. He never made it higher than single-A.

Whitehead's professional career began in 1988, taken by the Expos in the 16th round, out of Brawley Union High School in California.

At Brawley, Whitehead impressed with a 5-4 victory over one of his area's top teams, Central.

With the Expos, Whitehead started in the rookie Gulf Coast League, He went 2-3 over seven starts, with a 3.19 ERA. He moved to short-season Jamestown for 1989, going 4-2 over 12 starts.

Whitehead payed his third season at single-A Rockford. He also stayed at Rockford for three seasons. In 1990, he went just 2-14 over 22 starts, with a 5.47 ERA.

His final season came in 1993, taken by the Pirates in the minor league draft. His only time on the year, though, came back in the GCL, six outings, two starts, ending his career.

Whitehead later turned to coaching, returning to his old high school do to so.