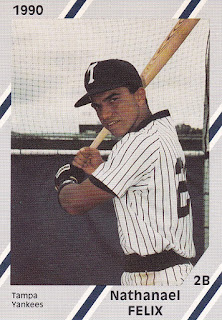 Nathanael Felix' signed with the Yankees out of his native Dominican Republic, likely hoping to make his name in the United States.

His career didn't end up that way. He played a single season as a pro. His career also left behind some question over his name itself, or at least the spelling.

Felix was fortunate to get his own baseball card, a rarity when a player's only season is in the rookie Gulf Coast League. But he is listed on his one card, his 1990 Diamond Gulf Coast League Yankees card, under the name Nathanael Felix, both front and back.

Baseball Reference and The Baseball Cube, however, have him under the more-standard spelling Nathaniel Felix.

An outside source for his name could not be found, leaving the spelling unclear. What is clear is that Felix' career lasted all 42 games. He saw time at second base and at shortstop, but he didn't return for a second campaign.

Felix' brief career started and ended in 1990, having been signed by the Yankees as a free agent out of Santo Domingo.

Once in Florida, the Yankees assigned him to the GCL. He got into those 42 games and hit .226. He picked up one triple. He knocked in 11 runners. He also stole seven bases. Those numbers marked the extent of his career.