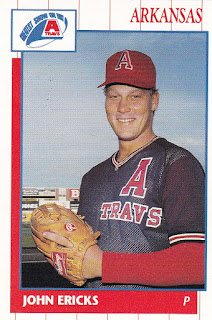 John Ericks showed excitement when he got the news the St. Louis Cardinals had selected him 22nd overall in the 1988 draft, according to The Chicago Tribune.

"All right! Oh, wow!'' the University of Illinois right-hander told The Tribune that June. ''I feel real good. I'm really happy. The Cardinals were one of my choices from the beginning, along with the Cubs and White Sox."

Ericks started in the minors with the Cardinals, but it was with the Pirates that he would make the majors. And he did so after battling back from injury.

Ericks' career began that year in 1988 as the first-round pick of the Cardinals. He played his high school ball at Chicago Christian in Palos Heights, Ill.

Ericks started with the Cardinals at rookie Johnson City. He went 3-2 over nine starts. He made single-A Savannah for 1989, then got four starts in an abbreviated 1990 at AA Arkansas.

He returned to Arkansas for 1991 and 1992. In one April 1992 game, Ericks struck out 11 and gave up five hits in a loss to Tulsa. Afterward, he received praise from his manager Joe Pettini.

"If John Ericks pitches the kind of game he pitched tonight, we'll be alright," Pettini told The Tulsa World. "Ericks did his job, but the rest of us didn't."

Ericks started 13 games for Arkansas that year. Then he hurt his shoulder in July. He didn't play at all in 1993 due to shoulder surgery. The Cardinals released him and he signed on with the Pirates.

Ericks saved another six games in 1997 over just 10 appearances in April. Then he got hurt again. It started off as neck stiffness. The Champaign News-Gazette even featured him in early May and his hopes of becoming a top closer.

"So far, so good," Ericks told The News-Gazette. "I've just got to stay on top of my game and hopefully keep the ball rolling a little bit."