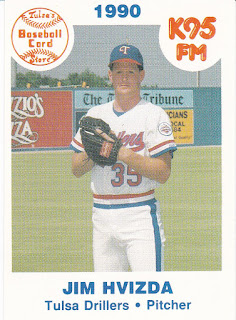 Bob Kleiser loved his daughter Kimberly Hvizda since the day she was born, the father wrote, according to The West Chester Daily Local News.

He remembered Kimberly as a baby, as a young mother and her raising her children. He misses her every day, Kleiser wrote.

"Jim Hvizda will rot in prison for the rest of his life, and after that he will rot in hell for the cold blooded killing of my daughter," Kleiser concluded, according to The Daily Local News. "But none of that will bring Kim back to me or her children."

Kleiser wrote out the statement to be read at Jim Hvizda's 2012 sentencing for the murder of his estranged wife Kimberly, a mother of four, outside the gas station where she worked.

Hvizda, two decades removed from a brief career in minor league baseball, was sentenced then to life in prison without the possibility of parole.

A native of Pennsylania, Hvizda's short baseball career saw him play in four seasons, three in the Rangers system. He played college baseball at Old Dominion. The Rangers selected him in the 19th round of the 1988 draft.

He won the Rangers organization's minor league pitcher of the year award in 1989, when he saved 35 at single-A Gastonia. He made AA Tulsa for 32 relief appearances in 1990, then three at single-A Beloit with the Brewers in 1991 to end his career.

Hvizda then made his way back to Pennsylvania and eventually married the woman he would murder.

By March 2012, the two had been estranged and she had a protection from abuse order against him dating back to the previous November, according to the criminal complaint filed against him and posted on NBCPhiladelphia.com.

Despite the order, Hvizda convinced Kimberly to meet him late March 25, 2012 outside her work, a local gas station. He had kept a diary over the previous week concerning his intentions to kill her. He purchased the knife he used in the attack the day prior.

He then met her, repeatedly stabbed her and left her to die.

After the attack, Hvizda drove to the local police station, rang the doorbell and volunteered to the responding officer that he had just killed his wife.

In another statement given at Hvizda's August 2012 sentencing, Kimberly Hvizda's oldest daughter, Elyssa - Jim Hvizda's stepdaughter - recalled her mother as an amazing person who meant much to many.

Jim Hvizda took her away from everyone, she wrote, according to her statement posted on The Pottstown Mercury site.